Say No More in Person 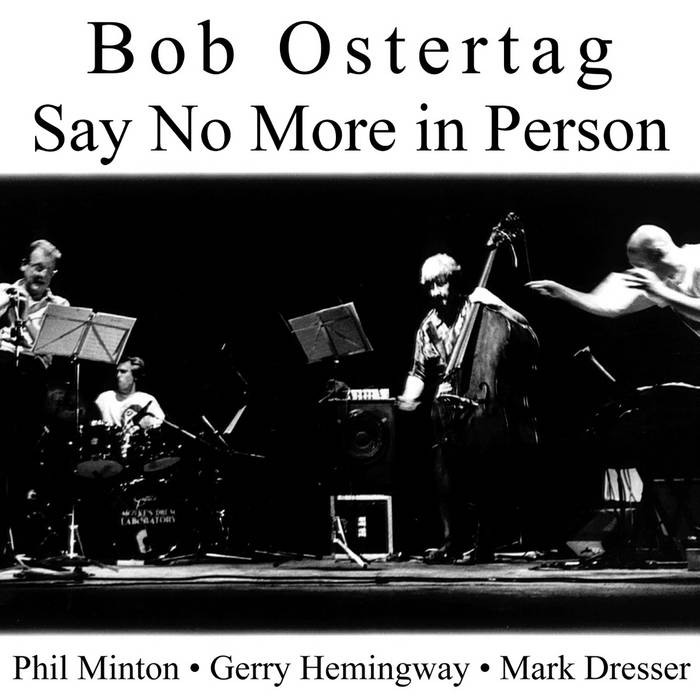 This is the second recording in the Say No More project. I began this project by asking the players to record solo improvisations, separately, with no communication with each other nor instruction from me. I then took the resulting tapes and, using a digital editing system, broke the solos into fragments and assembled a “band” from the splinters. The resulting recording became the first Say No More release, issued on the Zurich-based RecRec label.

For this, the second phase of the project, I created a highly unorthodox score of the compositions I had created on the computer using the solo improvisations as sources. I gave both the parts and the tape I made on the computer back to the musicians, instructing them to learn their parts. After very brief rehearsal, we then recorded “Say No More In Person” as a live ensemble.

My interests in this project were several. First, it would allow me to apply the compositional techniques common to “musique concrete” (sculpting and shaping a composition directly in the audio medium) to the work of composing for live ensemble.

Second, I was interested in creating a new sort of bi-directional flow between composer and instrumentalist, in which the result of one’s work immediately becomes the raw material of the other.

Finally, I wanted to use technology to alter the relationship between the instrumentalists and their own music. Each musician was asked to learn parts derived directly from his own improvisations. In effect I was sitting each player down in front of a mirror image of his own music. But the mirror was curved into prisms and lenses which were the results of the transformations I had made in the process of creating the “band” from the original solos.

On all counts I am quite happy with the results. When I consider the compositions, I cannot imagine any way I could have created them other than through this process. And, at least to my ear, the work does indeed convey the precision of “musique concrete” as well as the spontaneity and energy of live improvisation.

The live performance of the works turned out to be quite a challenge for the players. I had created the compositions by extracting very small sections from the middle of extended improvisations, altering them to fit into an ensemble scheme and then developing them in various ways over time. Often I was using source material that involved the use of extended instrumental techniques the players had never used in the a composed contextL in some cases which they had never fully articulated even to themselves. I was asking the players to repeat these maneuvers, on cue.

The recorded was made after very limited rehearsal. It was very much sink or swim. When I hear the recording, I think everyone not only swam but flew. The tape is not the polished product it would have been had the group had extended rehearsal time and numerous performances prior to recording. However, it effectively conveys a rather frenetic energy as each player chases his virtual mirror image.

I took a slightly different approach to the recording of each piece. For “Say No More,” the ensemble is limited to voice, bass, and percussion, just as in the computer-based original. For “Tongue-Tied,” I joined the ensemble, performing live electronic manipulations on the samples of the original solo improvisations.

The project will now go into phase three, in which I will blow this live recording into tiny bits and reassemble them into a new series of works on the computer. And then of course the band will learn those….

Special thanks goes first to the musicians for their truly remarkable efforts and patience. To Heidi Grundmann for making it possible. To William Winant, Mark Pritchard, and Chris Guitierrez for assistance with the score. And, as always, to Sara Miles.