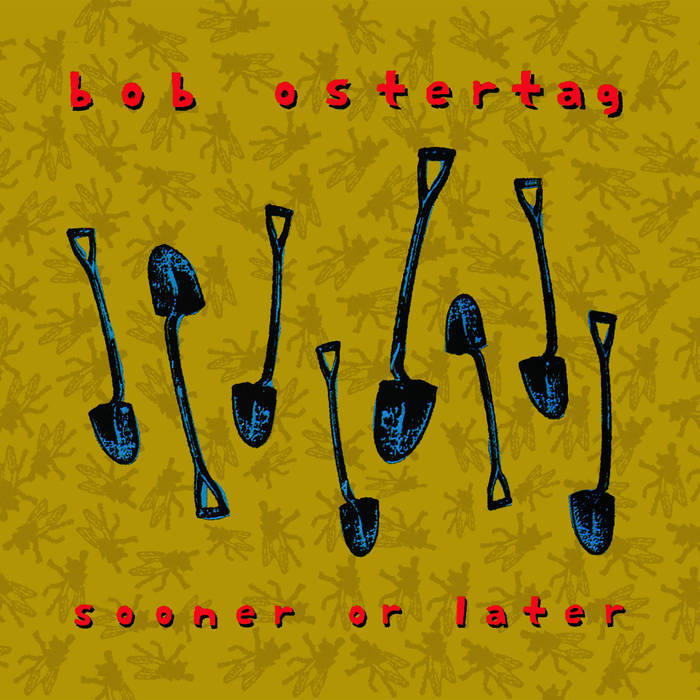 Solo. Based on a recording of a Salvadoran boy burying his father. RecRec Music (RecDec 37) Re-issued on MVORL/Seeland in limited edition in 2001. [Seeland 514]

Bob Ostertag did not simply create a political piece but a musical reality, in which sampling technology is used in a significant way for the first time. The music encircles reality, decomposes it into music and recomposes it until reality is no longer able to escape. It is this clarity that makes Sooner or Later great music, a music that has something to do with life again.
-- Die Zeit

Bob Ostertag made his Canadian solo debut at Victoriaville an opportunity to showcase his formidable talents... It was remarkable to see Ostertag seated at the keyboard, alone on the CGEP stage, creating a massive sound sculpture, the mutated sound of a child's crying causing the listener to get a choking sensation in the throat. It is ironic that in an era where the technology of torture and death, smart bombs and their ilk, have allowed some in North America to look away from the obvious and terrible conclusions of war, an artist like Ostertag is able to use simple technology to create such a devastating portrait of human suffering. Frames flew by, hypnotic.
-- Coda Magazine

Ostertag's music slices the boy's speech as thin as garlic cut with a razor blade, then blows each instant up into its own requiem. By examining each breath, each impact of shovel to ground under the audio microscope, he magnifies the pain so large as to engulf the listener with a wave of pure empathy while at the same time making art. Listening to this piece is like embracing someone who has no skin, as if the boy was a bare mass of nerves and guts and blood, which stain your own clothes when you touch him."
-- High Performance

The sounds in this piece come from a recording of a young boy in El Salvador burying his father, who had been killed by the National Guard. There is the sound of the boy's voice, the shovel digging the grave, and a fly buzzing nearby. In Part 2, there is an additional sound from a 3-scond sample of the guitar playing of Fred Frith.

For the most part, the recording is played back with little electronic alteration or "processing." Rather, the music is made by breaking the original recording into very small events, and stringing these events into musical structures, creating shapes radically different from the original. To use a film analogy, it is as if the frames of a film were re-ordered so that the characters do altogether different actions. Or you might imagine the source sounds as physical objects viewed from different angles. I have placed you not only at different positions around the object, but have made windows of different sizes through which you look, and occasionally curved the galls into lenses of various types.

The choice of sound source comes from my experiences during the 1980s, most of which I spent working in or around El Salvador. During that time I saw a lot of death. And in that culture, which is both Catholic and highly politicized, death gets surrounded with all kinds of trappings that are intended to make it heroic and purposeful. Death is explained as God's will, or as irrelevant since the dead "live on in struggle."

But most of the 70,000 who died were simply in the wrong place at the wrong time. They didn't want to die. There was no plan, no glory. Of course, there are many Salvadorans who did die heroically fighting a brutal regime against overwhelming odds. But even for the heroes, there is a starker, more immediate side to their death. Sooner or Later is about that side. There is a boy and his father is dead. And no angels sang and no one was better because of it and all that is left is this kid and the shovel digging the hole in the ground and the fly. If we want to find beauty here, we must find it in what is really there: the boy, the shovel, the fly. If we look closely, despite the unbearable sadness, we will discover it. -- Bob Ostertag, 1990

Sweet Papa. Bastards! Seeing my father, I feel like I have the bullet in my own heart, compañeros. I'd rather die for a just cause than be left abandoned. My father told me... he was a fighter... a fighter for our people. He told me not to be a good-for-nothing, that I should be creative and brave until the final victory of those who survive. Ay, compañeros, sooner or later I will avenge his blood.