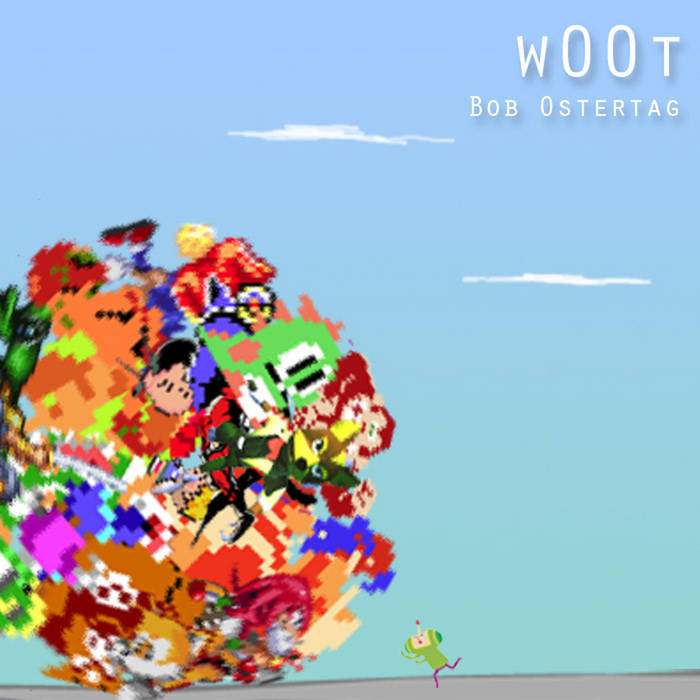 Jascha Narveson I never played the video games that were sampled for this piece, so I'm missing out on a huge layer of fun references. HOWEVER, even with no knowledge of the particular games, this piece is at once fun, funny, epic, and frequently pretty intense. It builds to a few frightening crescendos which, thanks to the large dynamic range of the recording, get pretty loud.

a collage of computer game sound and image

In March of 2006, I put all my recordings to which I owned the rights (14 CDs) up for free download from this site. w00t is my first release to skip the CD-for-sale stage and go directly to free Internet download, under a Creative Commons Attribution 3.0 license. Please download, copy, send to your friends, remix, mutilate, and mash-up. And please support this attempt to build free culture by sending a link for w00t to your friends. w00t consists of a 50-minute sound collage, a 4.5 minute sound trailer, and associated cover art. There is, however, no cover. w00t is a free, internet-only release. w00t was composed entirely from fragments of music from these computer games:

The w00t music began as the sound for Special Forces, a live cinematic performance by Living Cinema (Pierre Hébert and Bob Ostertag), which addressed the Israeli invasion of Lebanon in 2006.

From the blogosphere:
"My brain has been melted. I've listened to Bob Ostertag's w00t two times now. The first time without headphones and the second with headphones. Listen with headphones if you dare. I feel as if I've been aurally violated. w00t is a sound collage project that takes sounds from 18 video games. The games are cut up, strectched out, digitally delayed, pitch shifted, mashed up, washed out, rinsed, and repeated into a 50 minute and 15 second pile of plunderphonic bliss. Somewhere around the 27 minute mark I burst into laughter from the insanity of it all. When I got into it I felt slightly annoyed, but once the chaos became the new home to my ears it seemed that normal sounds like people talking, papers rustling, phone ringing, etc. became the offending sound. It was strange but when I was working with this going on in my head things kept magically happening in a series of the most strangest coincidences. This album/song is like a synchronicity generator. Check it out. And while your at it check out the rest of his site. He's uploaded 14 of his albums to download for free."
— Fistula Spume

"More hardcore than any death metal."
— Cody B.

"I can't really listen to a whole album of this, I fear it will not go well with me. I love that cover though!"
— Anna

"[h]e's not selling a lot of records, but he is paving the way for artists of the future."
— Sean Wraight, Everything is Pop

The piece is wildly colorful, taking cues from wonderfully varied game soundtracks. At times it may be harsh or ambient, and then dips quickly into irreverence with the theme of Katamari Damacy appearing out of the mist. Then it's a wild roller coaster from within the ball as the listener spins out of control picking up vegetables, speed dashing around, and accumulating people, animals and cars. It's a bit more of a horrific take on the "gentle" rolling game, but the cheeky humor still shines through.
— GayGamer