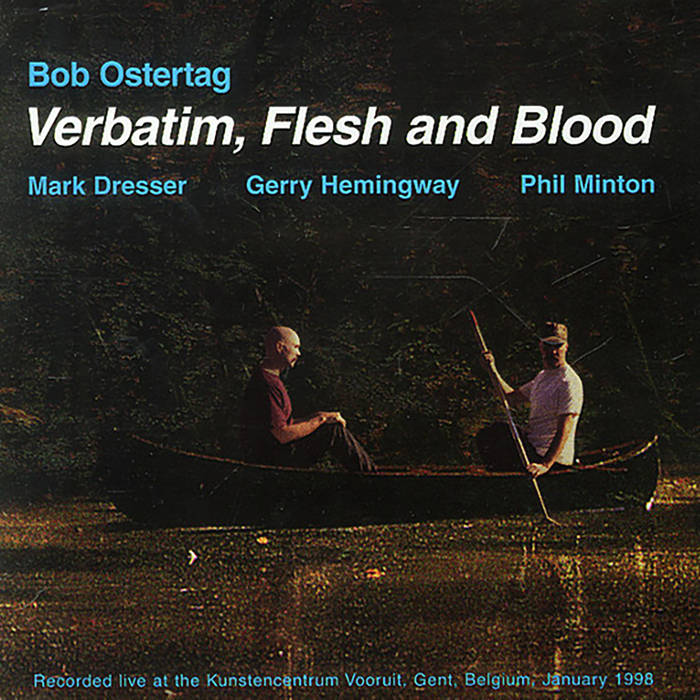 Original composer notes (1999):
This is the final step in a seven year project.

I began the project by asking three musicians to record solo improvisations, separately, with no communication with each other nor instruction from me. I then used a computer to explode these solos intro fragments, and assembled an “ensemble” piece by piece from the splinters. The result became the “Say No more” CD, issued on the Zurich-based RecRec label than then reissued on Seeland.

I then created a score of these compositions created on the computer, and gave both the score and the “musique concrete” tape back to the musicians, instructing them to learn their parts The group rehearsed the works toured with them, and recorded a live CD at ORF Radio in Vienna, “Say No More in Person,” released on the Transit label, and also reissued by Seeland.

I then put these live ensemble recordings back into the computer, exploded them into fragments, and created a second “musique concrete” work, “Verbatim”m released on Rastascan.

I then created a score of the work, and the ensemble toured it and recorded the present work, “Verbatim: Flesh and Blood” in concert at the Kunstencentrum Vooruit in Gent, Belgium, in January 1998.

The tension from the transitions between the virtual and the human realms drive the project forward.

After years of work and four CDs, I think I can say this is a viable way of composing music, which is innovative in several ways.

Composition/Score. By using digital audio as the medium in which to compose for live musicians, I have been able to compose for sounds and playing styles too complex and too idiosyncratic to be described by conventional notation. But since the score is essentially a road map to the tape, which is n integral part of the score, the notation I developed is simple enough to serve as a tool for the musicians instead of a hindrance.

Composer/Performer. There is a new sort of bidrectional flow between composer and performer, in which the result of one’s work immediately becomes the raw material of the other.

Performer/Score. Finally, technology is employed to alter the relationship between the performers and their own music º to push them to hear their own music in a new way. In effect each player is placed before a mirror image of his own music. But the mirror is curved in ways which are the result of the transformations I have made.

These are not merely theoretical considerations but are readily evident in the music. The three musicians were chosen precisely because each has a large vocabulary of highly personalized extended performance techniques developed through decades of improvisation. This project is the first time they have been able to bring this entire experience to bear on composed music. Yet as any listener who is familiar with their work will easily hear, while they are speaking with their own voices, they are also being pushed by the composed context to a different sort of performance that is demanded.

Another innovative aspect of this project is that the boundaries of where one “composition” begins and ends is blurred. This is in keeping with much of my recent work, which is less about creating a “composition” and more about starting a stream of music and shaping it as it flows from one medium to another. Different “compositions” become snapshots of the stream moving at different points in its path.

Thus one could delineate the “compositions” resulting from the project as follows:

How one views this is of absolutely no concern to me.

Many thanks to those who have supported this project over the years: first of course to Mark, Gerry, and Phil, then to Sara and Katie, to Heidi Grundman and Kunstradio at ORF Vienna, to all the friends at the Taktlos Festival where “Verbatim: Flesh and Blood” was premiered, to our friends at the Angelica Festival in Bologna who presented our European premiere, and to Wim Wabbes and the Kunstencentrum Vooruit where we recorded this CD, to Christian Clement for his consistent support, and to David Wessel, John Killacky, Chuck Helm and many many more who have supported us in so many ways along the way.